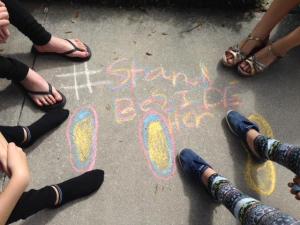 Several months ago, Girl Scouts of Gulfcoast Florida joined the national Stand Beside Her movement. It is a call to action for women and girls to band together and support each other, end comparison and competition, and create more collaboration. The year-round initiative was created by Girl Scouts Heart of the South, and is recognized by Girl Scout councils and other groups and organizations across the country.

Troop 257 from Sarasota took a particular interest in Stand Beside Her, and decided to take action. “Our troop is interested in community involvement and making a difference in the world,” said troop leader Jeanne Koren. Some of the girls in her troop had noticed a difference since starting middle school in the way they feel about themselves. This directly affects self-esteem, and can have a negative impact on a girl’s ability to reach her full potential. “When we looked at the [statistics] online about this it was surprising to us,” she explained.

The troop decided to kick off their own campaign with a “Chalk It Up to Being a Girl” Encouragement Project, one of several suggestions offered on the Stand Beside Her website. The concept is simple, but powerful: girls use chalk to draw outlines of their feet on a publicly visible sidewalk, and then write messages of encouragement next to them. 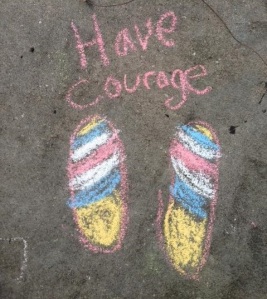 The girls drew a lot of attention during the project, which they completed at United Church of Christ Sarasota. “One man told us how he stood beside his two daughters (now grown) when their science teacher told them that girls just don’t do as well as boys in science,” Koren explained. Sadly, his daughters’ science teacher was herself a woman. Other onlookers were equally moved. “An older woman had tears in her eyes and was speechless when we told her what we were doing.”

But Troop 257 isn’t stopping there. They are also planning to meet with two school principals to have “Chalk It Ups” at their schools and girl-led awareness speeches at faculty meetings. “And,” said Koren, “we have ideas for much more!”

The troop is challenging others in the Gulfcoast Florida council to organize at least one Stand Beside Her-themed activity or event over the course of this school year. Their suggestions include:

Will you accept Troop 257’s challenge? How will you and your troop “Stand Beside Her?” Email your stories and photos to lorit@gsgcf.org.

~Lori Tomlinson is the Manager of Communications and Marketing for Girl Scouts of Gulfcoast Florida, Inc.

Say hello 👋 to our new cookie, #Lemon-Ups!
Olivia is a Cookie Pro that likes to #thinkoutsidethecookiebox Now she’s featured on this year’s box of Tagalongs! All of us at GSGCF are so proud of you, Olivia ✨
✨New year, new opportunities✨#2020
Wishing you and your family a very Merry Christmas! 🎄
The results are in... congratulations to our 2019 Gingerbread Festival People’s Choice Award winners!🏅
It’s the most wonderful time of the year! It’s time for the 11th Annual Gingerbread Festival at the @mallatutc! ☃️
❗️DUE TO UNFORESEEN CIRCUMSTANCES, THE SHOP WILL BE CLOSED TODAY, NOVEMBER 7❗️
Who’s the birthday girl today? Our founder, Juliette Gordon Low! 🎂Happy Birthday Juliette, and thank you for inspiring generations of GIRLs to be go-getters, innovators, risk takers, and leaders 💪 . . . . . . #gsgcf #girlscouts #juliettegordonlow #gsusa #gogetter #innovator #risktaker #leader #girlscout #gs
💛 Gold Award Spotlight: “I learned a lot about myself and my community through my Gold Award. My community is very encouraging and willing to help, especially for environmental issues.” ~ Hayley Reid, Troop 477 Congratulations on earning on Girl Scouting's highest honor! 💛 Read her full story at gsgcfblog.org. #bees #bee #pollination #pollen #pollinator #trees #hurricane #environment #outdoors #rebuild #pollinators