Thin Mints, Tag-a-longs, and Trefoils – oh my! Next year, the Girl Scout Cookie legacy will turn 100 years old. You know how yummy the cookies are, and that Girl Scout troops use their cookie sale proceeds to help fund their many community service projects and other activities. But how did it all get started?

In 1917, only five years after Juliette Gordon Low founded Girl Scouts in the United States, the Mistletoe Troop of Muskogee, Oklahoma sold home-baked cookies in their high school cafeteria. As it is today, the girls used their earnings to pay for their troop programs.

In July 1922, Girl Scouts of the USA’s The American Girl magazine featured a cookie recipe from the Chicago, Illinois council. Throughout the 1920s, Girl Scouts across the country baked simple sugar cookies, packaged them in waxed paper, and sold them door to door at prices unheard of today: often 25-35 cents per dozen!

With the sugar, butter, and flour shortages of World War II, the Girl Scout Cookie program was put on hold. Beginning in 1944, Girl Scout calendars were produced and sold as an alternative fundraiser. Girl Scout Cookie sales enjoyed a healthy increase following the war, and the beloved tradition was back in full swing. 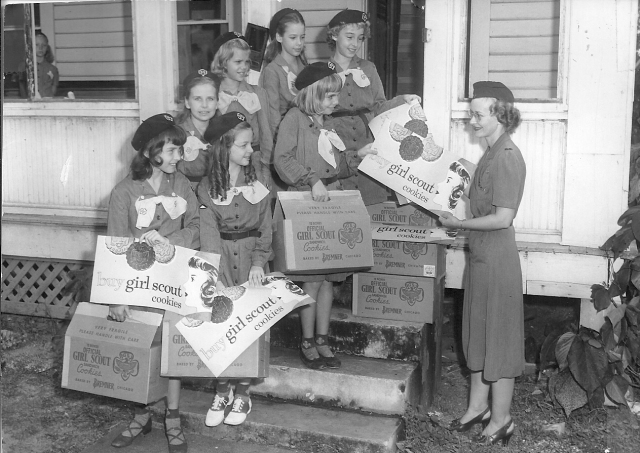 A number of cookie variations have been offered over the years, including sandwich, shortbread, and chocolate mint varieties. Today, new varieties cater to consumers looking for healthier alternatives or gluten-free options.

Perhaps the greatest advance in the sale of Girl Scout Cookies came in 2015, with the online Digital Cookie platform, helping girls build 21st-century business skills.  One thing has remained the same, though. Through the Girl Scout Cookie Program, girls gain confidence and take great pride in their success, all while earning funds and helping make their communities a better place – one cookie at a time.

~Lori Tomlinson is the Manager of Communications and Marketing for Girl Scouts of Gulfcoast Florida, Inc.

Have you signed up for our Fall into Fun Pumpkin Art Contest yet? 🎃 It's not too late! Sign up now using the link below! Open for individual and group entry. 🍂
Happy Hispanic Heritage Month! 🎉 Today and every day we celebrate the rich diversity of the Latinx community and its contributions to our beautiful nation. Show your pride by leaving a comment with your heritage flag or emojis that represent your culture! 👏🏻👏🏼👏🏽👏🏾👏🏿 #YoSoyUnaGirlScout #HispanicHeritageMonth
It’s nothing a taco couldn’t fix 🌮 Join us at @circo_srq TONIGHT from 6-10PM for Dine and Donate night in support of the Girl Scouts. A portion of all purchases are donated back to GSGCF! Enjoy some delicious food and show your support ✨ #girlscouts #tacothursday
We are so thankful for @circo_srq again choosing us as their monthly charity partner of choice! Every Thursday in September from 6-10PM is ladies night and a portion of all purchases are donated back to GSGCF! Tacos with a cause = the best Taco Thursday ever! 🌮💚
A 20th year Commemoration of September 11 is being held on Saturday, September 11, from 6:00 - 7:30 p.m. in the Patriot Plaza at the Sarasota National Cemetery. Local Girl Scouts will be assisting with this ceremony, along with other local community leaders. We invite you to visit the website to explore more information and sign-up to attend. https://bit.ly/911FREETickets
Today is the first day of our Mags & Munchies program! We could spend some time telling you all about it, but why not hear directly from a Girl Scout herself on why she loves to participate?
No need to worry about dinner tonight, we've made the plans for you! Tonight you can have some guilt-free delicious food since you're supporting a good cause.
With only 11 days left until the start of Mags & Munchies, Ms. Penguin 🐧 has joined some Girl Scouts for a weekend away at a beach side resort! 🏖☀️What are your weekend plans? #penguinonparade #fridayfun #girlscouts